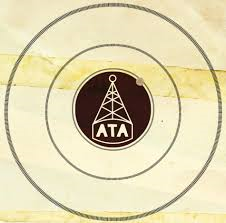 Filed Under: News, Talkin' All That Jazz, Vinyl Junkie

ATA Records is the 100% analogue jazz/soul/funk/afrobeat label based in Leeds in the north of England, an offshoot of the purely analogue recording studio of the same name, ATA Studios (ATA by the way stands for All Things Analogue). The label is the brainchild of two major players in the Leeds music scene for over a decade and a half.  I’m talking about bass player/guitarist Neil Innes (not the Monty Python one), and saxophonist/guitarist/percussionist Pete Williams, both former members of Leeds’ afrobeat warriors Ariya Astrobeat Arkestra (First Word Records) as well as being well respected session players/sidemen in other people’s bands.

While still playing in Ariya Astrobeat Arkestra in 2012/13, they started writing material and recording it for side projects that would hopefully see some vinyl 45 releases somewhere down the line via interested record labels.

What started out as a few mates putting down some demos for a couple of limited edition 45 singles releases ended up being 22 different tracks from a really broad spectrum of the music they all loved….Indo-Jazz fusion, gutbucket rhythm & blues with that late 50s/early 60s flavour, film/TV library and soundtrack music, Ethiopian jazz Mulatu style, stomping mid-60s Motor city soul, classic Blue Note era organ jazz and some dirty and scratchy 45 sounding funk.

All music was recorded the classic way at the ATA Studio – recorded live straight onto vintage 2″ tape machines with few overdubs and using valve amps and 1950s/60s mics. All overseen by the genius engineering skills of Neil Innes at the mixing desk, Leeds’ very own Joe Meek 🙂

After checking around for suitable record labels, they couldn’t find any options that really suited the diverse range of music they were producing so they decided to just put the tracks out themselves. And that’s how ATA Records was born.

By summer 2014, Neil and Pete decided to release all these first recordings together on a compilation album to get them out into the public domain as soon as possible so they could move onto new material. One of the few labels who’d been positive about the early ATA recordings were crate digging fanatics and lords of the deep Here And Now Recordings. They offered to licence and release a compilation album simply titled “An Introduction To ATA Records” and it came out in November 2014 to great critical acclaim. Some fantastic music is featured on this release from some great named bands/ensembles including The Sorcerers, The Cadets, The Lamplighters, The Harmony Society, The Mandatory Eight and my own favourite, The Yorkshire Film & Television Orchestra. Buy the album from iTunes, Amazon or direct from Here And Now Recordings bandcamp page and discover some contemporary music that references the past with love and respect but refuses to be classed simply as “vintage”.

For 2015, ATA Records have dropped a gem of a single, a cover version of the 1960s pop ballad anthem “I (Who Have Nothing)” made famous by the likes of Shirley Bassey and Tom Jones.  The ATA Records house band have turned it into a groove-heavy deep soul ballad featuring the passionate and unforgettable vocals of Yorkshire soul singer supreme Rachel Modest (Bluefoot Project/JD73). If this track doesn’t have the hairs on the back of your neck standing up, you must be a robot or a zombie! And the lovely chaps at the label are giving us this track as a FREE DOWNLOAD. Grab it now from  https://atarecords.bandcamp.com/

There is so much more good music on the way from these guys so keep up with future ATA Records releases and live gigs from their artists via their Facebook page ATA Records or follow them on Twitter and go to their website www.atarecords.co.uk and register to get their newsletter and updates.