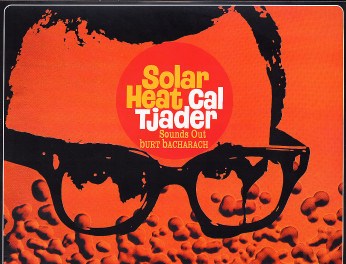 Filed Under: Talkin' All That Jazz, The Latin Lowdown, Vinyl Junkie

After digging through my 30 plus Cal Tjader albums the other night for the previous blog about him, I got into it so much I started playing tracks I hadn’t heard for years! So I thought I would pick out another 5 favourites from his vast back catalogue of songs, this time specifically mambo numbers.

1). “Mambo Sangria” (from the “Solar Heat” LP on Skye Records 1968)
I love this 1968 LP a lot due to the experimentation Cal was doing at the time with different instrumentation (electric piano, organ, guitar, drum kit) and styles (Latin funk, Latin soul, even a touch of rock and pop). It’s also on Skye Records, a label he co-formed with fellow musician Gary McFarland (which sadly only lasted a few years). This little mambo gem is one of the more traditional sounding Latin tracks but still with a nice quirky flavour as the piano montuno is played on an organ. Groovy 🙂

2). “Mambo Show” (from the “Primo” LP on Fantasy Records 1973)
A heavier Latin/less jazz Cal Tjader record from the early 1970s which united him with 2 other giants of mambo and Latin music from the golden era (the 1950s and 1960s), pianist Charlie Palmieri and percussionist and fellow vibes lover Tito Puente.  This is a rework of Charlie’s 1968 giant descarga mambo anthem “Mambo Show”, this time slightly slower than the original but still some great soloing from Charlie on electric piano,  Cal on vibes plus Bobby Nelson on tenor sax.

3). “Mambo Mindoro” (from the “La Onda Va Bien” LP on Concord Jazz Picante 1980)
From Cal’s Grammy award winning LP and his first for the new Concord Records Latin imprint Picante, this reminds me of my jazzdance DJ days 1982-85 before I properly discovered salsa. Throwing this down at sweaty little clubs in Bradford and Leeds as jazz hoofers battled each other on the floor was such a buzz. So fast yet so tight, the musicians don’t miss a beat. I loved these Concord Jazz Picante albums of Cal’s in the early 1980s.  Well produced, well played and my first introduction to the great man before I started to dig for his older and more famous recordings.

4). “Philadelphia Mambo” (from “The Cal Tjader Quintet” LP on Fantasy Records 1956)
Featuring the great mid-1950s quintet line-up of Manny Duran (piano), Carlos Duran (double bass), Luis Miranda (congas) and Bayardo Velarde (timbales) plus Cal on vibes and percussion, they pack such a punch rhythmically for just a 5 piece band. Those old school percussionist cats back in the day really hit the congas hard. You can feel the power of Luis Miranda’s tumbao jumping right out of the speakers! Love the vibes montuno that Cal plays through the piano solo which keeps that clave feel at the heart of the music.  Great cover of Tito Puente’s original mambo tune.

5). “Mamblues” (from  the “Mambo With Tjader” LP on Fantasy Records 1954).
Another track featuring the same musicians from “Philadelphia Mambo” but recorded two years earlier. Again, one from my 1980s jazzdance days though my copy is a 1987 Fantasy Records remastered re-issue not an original pressing. Never mind, the music still sounds as good as the minute it was first recorded. Raw small band mambo and again, so tight that you know this a band were welded together as a unit via loads of live gigs. Essential Tjader from his first recording period.

Loving this Cal Tjader revival and can’t wait to spin a few of these on vinyl at Manteca in Leeds very soon (check my Calendar on here for exact date and details). Maybe the next Tjader blog might concentrate more on his soul and jazz side.