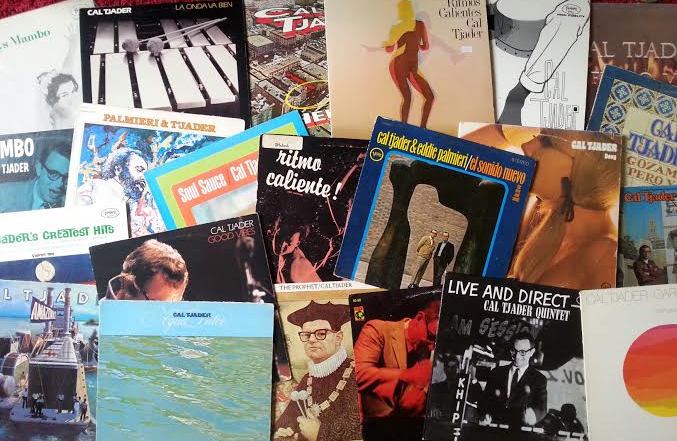 Filed Under: Talkin' All That Jazz, The Latin Lowdown, Vinyl Junkie

As you know from my previous blogs or DJ sets and clubnight fliers, I’m a huge Cal Tjader fan. Loved the Latin jazz vibes player’s music since I bought my first LP by him back in 1982 (“A Fuego Vivo” on Concord Picante). Last Sunday, I was having a Cal Tjader day at home refreshing my Tjaderology and playing a lot of his LPs from the 30+ I own. Perfect Sunday chillout.

Enjoying it so much so, I’ve been carrying on with the Tjader tunes the last couple of days.  Whilst playing the “Soul Sauce” LP today from 1964,  I thought I’d do another Cal blog and pick another 5 of my favourute Tjader tracks, this time focussing on his Latin soul side. Not his greatest works but they served a purpose and helped him reach a wider new and younger rock and pop audience. I personally like them and there’s a few cracking tracks of his from that sub-genre. Here’s 5 I like and  in no particular order of preference.

1. “Soul Sauce” – Cal Tjader (from the LP “Soul Sauce” on Verve Records 1964)
Originally a mid-1940s Dizzy Gillespie/Chano Pozo composition, Cal already recorded the track back in 1954 as a tipico cha cha cha. In 1964, he re-records it adding some soul strut, a heavier backbeat and handclaps, and when released as a single, it sells over a 100,000 copies and gives him his first hit. Suddenly Cal, his producer Creed Taylor and his label all realise mambo is so “last decade” and Latin soul is the “thing”.  If it works, do it again. Onto the next one…..

2. “Soul Motion” – Cal Tjader (from the LP “Soul Bird : Whiffenpoof” on Verve Records 1965)
This is almost “Soul Sauce Pt2″…the same lazy soul cha cha groove with a backbeat but a slower tempo this time. The band jazzes it up playing through a 12 bar blues sequence though the piano vamp is more Blue Note Records soul jazz than Latin cha cha cha. Think “Watermelon Man” or “The Sidewinder”.

3. “Sweet Honey Bee” – Cal Tjader (from the LP “Hip Vibrations” on Verve 1967)
This one actually is a Blue Note Records soul jazz number. Originally written and recorded by Duke Pearson for his 1967 LP of the same name for the label, Cal pretty much plays it straight with just a slightly heavier backbeat, the vibes doubling up with the flute on the opening and closing theme plus they up the tempo here. I love the original and I love Cal’s cover. Win-win.

4. “Come An’ Get It” – Eddie Palmieri & Cal Tjader (from the LP “Bamboelate” on Tico Records 1967)
In 1967, Cal recorded as a guest on Eddie Palmieri’s Tico Records LP “Bamboleate”. It was a follow-up to their first collaboration on Cal’s Verve LP “El Sonido Nuevo” in 1966. This strutting boogaloo/Latin soul instrumental stomper came out of the sessions, Cal really firing up the vibes backed by Eddie’s tough NYC Latin band La Perfecta. Smoking stuff!

5. “Solar Heat” – Cal Tjader (from the LP “Solar Heat” on Skye Records 1968)
Title track from the first LP Cal recorded for a new record company called Skye Records, owned jointly by himself and musician/producer Gary McFarland. The track has a real trippy flavour to it. Not surprising since it was 1967/68 and the “Summer of Love” in the USA. Starting with a great funky drum break from Grady Tate, it grooves along in a lazy hazy way guided by Ray Barretto’s congas and the electric bass playing of Chuck Raney.  Smoking stuff but in a different way 🙂

And that’s my final Cal Tjader Latin soul selection. It’s been fun digging through the LPs again checking out this side of his music. Maybe I’ll do Part 4 in the future and look at his straight ahead jazz tracks or Far Eastern/Oriental LPs or possibly his Brazilian music.  See what happens……