In the words of Cornelius Fudge upon the sight of Voldemort, he’s back…

You know who, it’s Fergus Quill with his Imaginary Big Band! After a stonking debut headline show at The Wardrobe and headlining Salèmango 2019 in magnificently cosmic fashion, Ferg’s Imaginary Big Band are ballistically flying outside and beyond the echelons of the music industry, leaving nothing behind them but roofless venues and the smoke of space fire.

DJ Lubi and Tight Lines are confederating to provide a service stop at The Brudenell Social Club on the 13th of November. Here the band will yield the atmosphere and energies of the room to catalyse their journey on to the next point of the triangle.

Lubi and Tight Lines have appointed Ruby’s Sparkly Space Invaders and The Mabgate Swingers Party to assist in energy creation.

With such a bold and noble quest ahead, commander Fergus Quill has assembled one of the most elite musical task forces our world has ever seen. Consisting of members from… Têtes de Pois,  Skwid Ink, Necktr, The Mabgate Swingers Party, J Frisco, Jasmine, TC and The Groove Family, B-ahwe, Slow Loris, Mamilah, Eastgate Big Band, Sonic Blue, Dixon, HEV and Hey Fish amongst many others.

The Big Band play rowdy and always huge sounding arrangements of an incredibly diverse selection of tunes from composers including Duke Ellington, Sun Ra, The Rajasthan Express and more. Fergus Quill and his band are on a mission to make Britain weird again.

For vous tonight, and only pour you! Three women… One stage… Sparkling dirty sh*t… And why would we care?! Welcome to the cabaret fantastique des trois women…

Ruby’s satirical, glitzy, feminist dance theatre smashes outdated ideas of what it means to “be a woman”. Having shaken the foundations of the likes of Sadler’s Wells theatre, this international trio will be coming fresh from France’s Pink House Festival to a social club near you.

“retro-futurist activist-comedy” (The Guardian)
“blasts through pre-conceived notions of what should be on the menu for a night of dance. . .high-octane physical theatre” (British Theatre Guide)
“This is not dance in any conventional sense” (The Reviews Hub)

The Mabgate Swingers Party are bringing jazz back to the party. Jazz was invented for dancing and that’s the way they want to keep it! Taking influence from New Orleans jazz, Kansas City swing and all the big band greats, this young energetic septet will turn any night into one worth remembering and leave you wondering what made you ever think Jazz was boring. 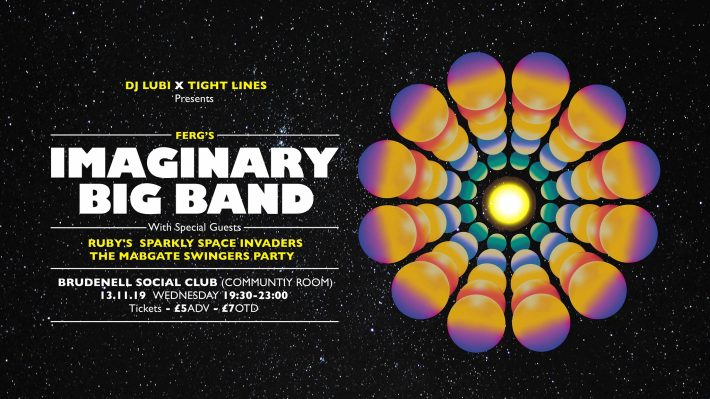