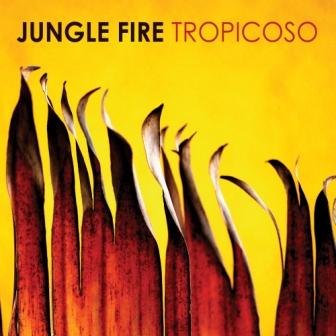 Filed Under: News, Reviews, Talkin' All That Jazz, The Latin Lowdown, Vinyl Junkie

The long awaited debut album from California afro-latin funk crew Jungle Fire is almost here. “Tropicoso” is released worldwide on September 30th on Nacional Records and will be available in all formats – vinyl, CD and download.

I’ve got a preview copy of it and all I can say is if you liked their first two Colemine Records singles “Comencemos” and “Firewalker”, you will LOVE this joint! Bringing you a similar musical vibe to the singles but HEAVIER!

The 4 tracks available on the first 2 singles are here but rebooted. Everything sounds bigger and fatter in the mix. Already banging tunes just got even more bang!

The new songs are equally as good and we in the UK had a live preview of them last December as Jungle Fire blazed across the country on their debut tour.

The title track “Tropicoso” is a great headnodding cumbia meets latin funk monster whose cheeky cumbia percussion intro doesn’t prepare you for the sledghehammer beat and brass section double whammy knockout punch when it comes in! Pow!!! You ain’t getting up from the floor after that one papa…..

If you do, stick on your platform shoes, flares, pimp hat and wide lapel jacket and get yourself down to the afro-latin disco that is “Village Hustle”. Pure mid-70s Bohannon jamming with Brass Construction flavour. Love it bigtime already and can’t wait to drop this musical bomb on the dancefloor asap…

“Snakepit” takes you in the total opposite direction. Psychedelic reggae with a rocksteady beat plus heavy reverb guitar straight from a surf city garage band record! I’m even feeling a bit of a “Ghost Town” Specials vibe from this, which is no bad thing in my view. Nice and slow, a break from the full-on brass and percussion attack on the rest of the album.

Bboys/bgirls, if you’re looking for another “Comencemos” type track to bust your moves to, then you’ve got it. “Los Feligreses” sees Jungle Fire cover another mid-70s latin funk monster, this time by Luis Santi y Su Conjunto and the big track from their 1975 “El Bigote” LP. The kit on this baby is pure nastiness…

If you already know and love Jungle Fire, then it’s business as usual. More great afro-latin funk for you to enjoy. If you’re not familiar with the band but you like stuff by Ozomatli, Grupo Fantasma, Los Charlys, Brownout and Quantic, then you’ll like this band and album too. Comes DJ Lubi recommended for all those who love more cowbell with their funk 🙂