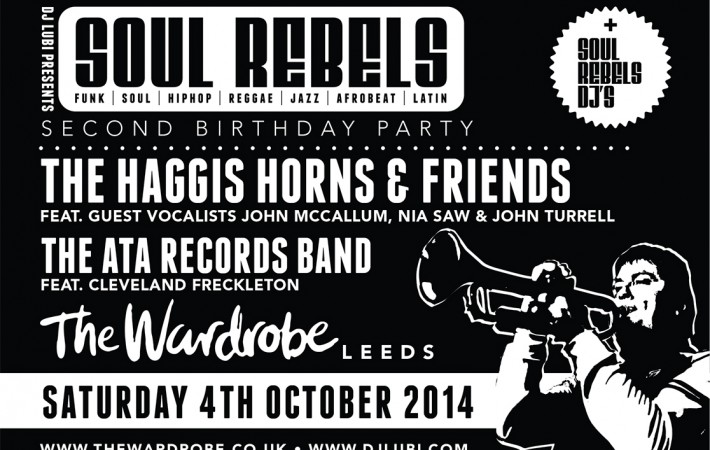 Filed Under: Live music, News, Talkin' All That Jazz

On Saturday 4th October, my Soul Rebels session celebrates it’s 2nd birthday at The Wardrobe in Leeds. It’s hard to believe how fast 2 years have flown by but I guess that’s the sign of having fun. We’ve had some fantastic gigs with great bands and artists over these two years and I feel we have added something special and a little bit different to the music scene in the city.

I started the sessions back in 2012 because I was bored of what was on offer at the time in Leeds and I just wanted somewhere to hang out which featured the music and bands I liked. I’ve always preferred to go to clubnights that play a broad range of styles within the black music and global beats spectrum. A mix of funk, jazz, soul, reggae, hiphop, Latin, afrobeat, Brazilian beats and even electronic and house music but from the more soulful side. I couldn’t find this type of place anymore so I started one myself.  It would be driven by music and not profit, and the music would be REAL and DEEP. No awful Stevie Wonder “Superstition” car-crash mash-ups that way too many DJs were playing. No reliance on “wedding funk & soul hits” or pandering to the “play something we know” crowd. And no more bands doing endless lame cover versions of “Son Of A Preacher Man” and “Respect”. Real bands playing real original music.

If that meant getting my own night and being brutally hardnosed about getting my own way, so be it.  After 30 years in the game, there comes a point were you really only want to do what you enjoy and not what you have to do to pay the bills. It was never going to be a big money making venture anyway but at least I would have one musical oasis a month where I could play and promote MY choice of music and if that included Madlib, Fela, Seu Jorge and the Art Ensemble Of Chicago and you didn’t like it, tough shit. Here’s your money back and there’s the exit. Bye bye.

And that’s how Soul Rebels came about.

Also big up to the no-compromise and kicking DJs who have guested over the years….Aly Gillani (First Word), DJ Timber (Barcelona), Tony Green (Fresh Jive), Jonny Crawshaw (Give It Some), Gip Dammone (DIG! Family) and Andy H (Tuesday Club). Plus props to my fellow resident DJ for holding the fort when I’m running around trying to get the live bands onstage…DJ Chris Welch (Sounds Lik This/Phuture Motion).

Back to the 2nd Birthday Party on Saturday 4th October at The Wardrobe. I’ve got as headliners one of the best funk bands in the UK, the one and only Haggis Horns. No need to give them a roll call as everyone knows them now. I’ve been booking them since 1999 and for this gig, they’ve put together a one-off special line-up for me with the full band PLUS 3 fantastic singers who are guesting on their forthcoming 3rd album. I’m talking about John McCallum (Corinne Bailey Rae band), Nia Saw (ex-Zap Mamma) and John Turrell (Smoove & Turrell). Check the full details of the event in the Calendar section of this website and get your tickets booked now!