Soul Rebels…..from Fela to Dilla and beyond! 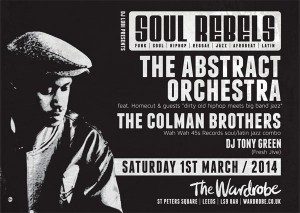 Soul Rebels is the live music and DJ session hosted by Lubi at The Wardrobe in Leeds, one of the city’s best known medium size music venues since it opened in 1999.

Soul Rebels brings together all Lubi’s favourite music genres under one roof… soul, jazz, funk, hiphop, reggae, Brazilian beats, Latin and afrobeat – hence the motto “…from Fela to Dilla and beyond!”