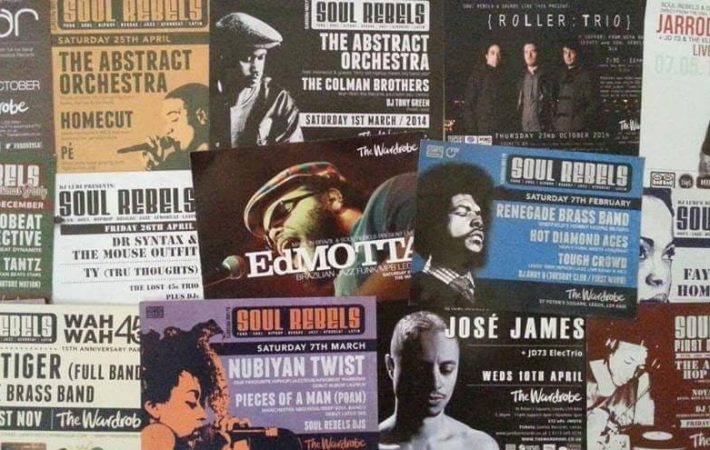 Filed Under: Live music, News, Talkin' All That Jazz

My flagship live music night in Leeds (UK), Soul Rebels Sessions, celebrates it’s sixth birthday on Saturday 6th October 2018 at The Wardrobe. We have a great London-meets-Leeds party with afrobeat band Kokoroko (London) making their northern debut plus support from Leeds soul band Mamilah. Kokoroko feature on the 2018 Gilles Peterson/Brownswood Recordings London jazz compilation “We Out Here”, and Mamilah are the young Leeds soul band who skip the covers and are making original soul music. Check the calendar on this website for full gig info and ticket information and get down. 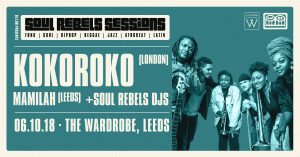 When I launched Soul Rebels (or Rebel Soul as it was known for the first 3 sessions), on Saturday 12th October 2012, I thought it might run for 6 months, maybe a year if lucky. I wasn’t promoting commercial music or big name acts, it was a local thing supporting Leeds artists and UK underground music acts. In reality, I wanted one place monthly where I could play and listen to the music I LOVE and not the music I have to play to make a living. It was never about money making or big profits, it was always about music first, supporting artists and building a musical community. 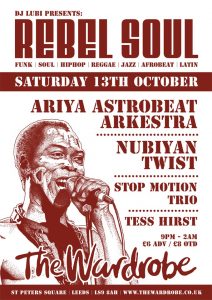 By 2013, I started to add international musicians to Soul Rebels shows. I never wanted to rely on big names and international acts so these shows tended to be stand alone gigs under the Soul Rebels brand. The regular events would continue to support local bands as much as possible. I also refused to go down the “big guest DJ” route. If I’m going to spend £5000 on an artist, I’d rather book a live band or two than a DJ any day.

Slowly but surely, the Soul Rebels vibe of jazz/global beats/neo-soul/hip-hop all under one roof started spreading across the city. In 2015, I launched RE:SOUL with saxophonist Jonny Faull, a monthly jazz/hip-hop/neo-soul jam session aimed at encouraging young musicians at Leeds’ music academies to get up onstage and jam with an experienced house band. 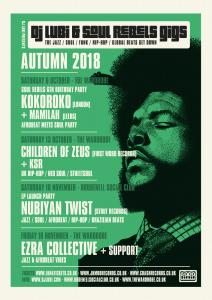 So many great shows. Amazing musicians and artists. And an audience who come down for THE MUSIC and not the cheap beer or free door entry or even for the pull. It’s refreshing when it’s music led. Thanks to all who have supported in the past and the present.

If you’re in Leeds, Yorkshire, the north or even beyond, get yourselves down on Saturday 6th October to The Wardrobe Leeds (UK) and help us celebrate 6 great years of live jazz/soul/afrobeat/funk/hip-hop/Brazilian music/Latin sounds with myself, DJ Chris Welch, Kokoroko and Mamilah. We’ll raise a glass to past achievements and look forward to the next 6 years too.