***NEW RESCHEDULED DATE***
Due to the second England wide COVID-19 lockdown and then the Tier 3 status for Leeds in December 2020 with all venues closed, we now have to move this sold-out show into 2021. We can confirm the new date for the re-scheduled show is SATURDAY 13th MARCH 2021. All timings remain the same (doors 7pm, curfew 10pm). All tickets for the original show valid for this new date. See you there

DJ Lubi Presents…..
RE:SOUL SESSIONS
SNG- Secret Night Gang
+ Shaniah Williams
Past, present & future soul music!
13th March 2021 | 19:00 Doors
SOLD OUT
Secret Night Gang – The Sun: https://youtu.be/3sEll2pEegI
Shaniah Williams – https://www.facebook.com/watch/?v=475995166320651
–
Longtime Leeds live music promoter and DJ Lubi Jovanovic aka DJ Lubi, has a series of hugely popular and fast selling live jazz gigs under the banner Jazzland Sessions this autumn at Brudenell Social Club Community Room. They are limited capacity, all seated, pre-booked only, table service and fully COVID-19 compliant concerts. Now he’s adding a soul music showcase to his jazz concerts.
RE:SOUL Sessions have been Lubi’s Leeds soul/hip-hop/jazz-funk jam and showcase event since 2015, first at Hirst’s Yard, then The Wardrobe bar and since autumn 2019, at the Hifi Club. The format is always the same – a showcase set from a new young artist or band followed by a jam session. Since March 23rd 2020, and the closure of the Hifi Club temporarily due to COVID-19 (still closed), RE:SOUL has been on furlough. Until now. For one night only, RE:SOUL will return for a special showcase session featuring two new artists from different ends of the soul spectrum. No jam session this time due to COVID restrictions. Just two new breakthrough artists making their debut appearances in Leeds.
Manchester is buzzing right now with great contemporary soul music – deep soul, neo-soul, hip-hop soul – with acts like Children Of Zeus, IAMDBB, Mali Hayes, KSR, LayFullStop, Roots Raddix, Lovescene and Jermaine Peterson.
There’s a new crew of young soul rebels breaking out from the city right now. Welcome to SNG (Secret Night Gang). They released their debut single “Wanna be with you” back in May 2020 and got good responses from all the right soul/jazz DJs including support from dons like Gilles Peterson, Craig Charles, Colin Curtis, Jeff Young (Jazz FM) and Dom Servini (Wah Wah 45s). In September 2020, single number two came out, an epic seven minute plus downtempo deep summer soul groove called “The Sun” that could sit easily alongside the early-mid 70s soul/jazz-funk sounds of Roy Ayers, Gil Scott Heron, Kool & The Gang and Rotary Connection. Very mature songwriting, musicianship and arranging for two young musicians still at music college. Gilles Peterson played it 2 weeks on the trot on his BBC 6 Music weely show, Jazz FM had it featured across several shows as did Worldwide FM, Totally Wired Radio and dozens of other soul/jazz radio stations and DJs in the UK and abroad. A real underground soul music hit of summer 2020.
Founder members of SNG (Secret Night Gang) are Mancunians Callum Connell (sax/keys) and Kemani Anderson (lead vocals). They’ve shared a love of writing music together since they were 14 year old school friends. Hooking up with Stuart Whitehead (bass) in 2018, the trio spent that summer writing an album inspired by soul, funk, r’n’b, gospel, jazz and everything in between. Manchester drum hero Myke Wilson (52nd Street, Jazz Defektors, Swing Out Sister, Corinne Bailey Rae) joined the band after they knocked him out at a jam session he was running in Manchester. And thus began the musical journey that saw them performing live on Gilles Peterson’s We Out Here Virtual Festival 2020 and having a track on the Manchester soul/jazz compilation album “2020” released by the city’s legendary live music venue Band On The Wall. Rumours abound that their debut album will be released in 2021 by one of the coolest jazz/soul/global beats labels around! Before then, they make their Leeds debut at RE:SOUL Sessions at the Brudenell for DJ Lubi
SNG (Secret Night Gang) are : Kemani Anderson (lead vocals) – Callum Connell (keys, sax) – Stuart Whitehead (bass) – Myke Wilson (drums) – Jack Duckham (guitar) – Al Scott or Matt Wilde (keyboards)
Sadly, the original support artist for this show – US soul singer Nyah Grace – can’t make the new date as she has returned home to Oregon for Chrtistmas. We have a brilliant new support artist. Shaniah Williams is another young soul singer and rising star of both the Leeds and UK scenes. Originally from Watford, she moved to Leeds in 2018 to study at the music college and quickly became involved in the local soul/neo-soul/jazz scene. Her first 18 months saw her gigging around Leeds (The Wardrobe, Hyde Park Book Club, Hit Club, Headrow House) as lead singer with 5 piece neo-soul/hip-hop jazz band The Space Antics. In 2020, she also started performing concerts under her own name with her 8 piece band singing original songs written by herself. Tonight she performs those songs with her trio which includes keys player Jacob Elliot who guested on Nyah Grace’s debut album so a nice link there between the two support acts. This singer is definitely one to watch out for in 2021.
Before and between sets, DJ Lubi will be playing the deep soulful sounds past, present and future that represent RE:SOUL.
This concert will fully comply with existing government COVID-19 safety regulations. You can check these at the venue’s website.
Tickets £32 per table
Table bookings only : up to 4 persons per table – all tickets must be pre-booked.
***if government COVID-19 rules change regarding public places and venues are closed again, this event will be postponed and rescheduled to a later date and all tickets sold will be valid for a new date*** 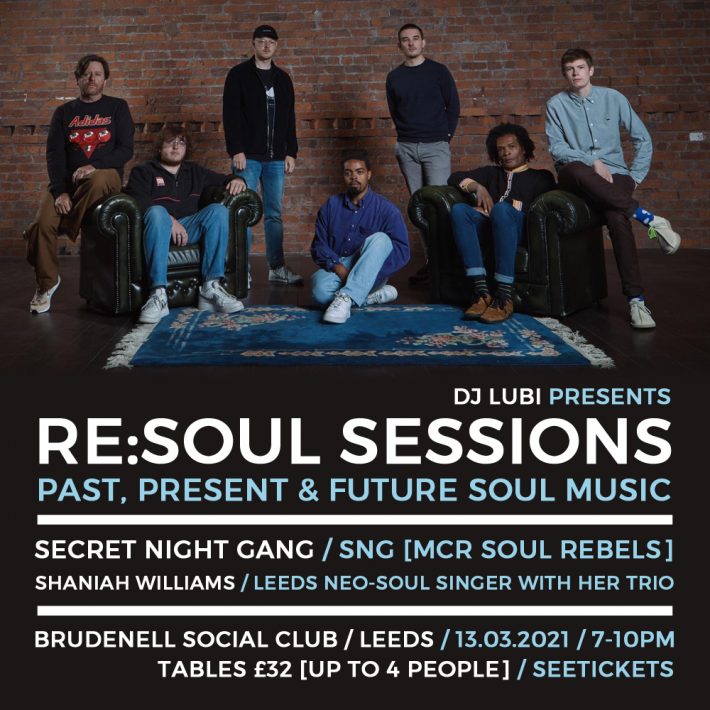