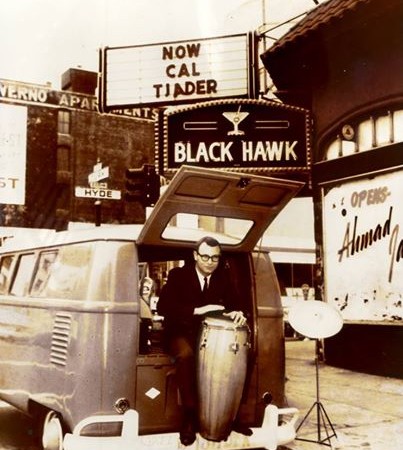 Filed Under: Reviews, Talkin' All That Jazz, The Latin Lowdown, Uncategorized, Vinyl Junkie

I’m launching a new Latin music lovers night in Leeds in September 2014 called MANTECA and the flier features one of my favourite Latin musicians of all time….vibes player Cal Tjader. I started picking some music out by him for the session and realised I had 30 Cal Tjader LPs in my collection. I thought that was pretty impressive but when I checked various discographies online, from 1951 to 1982 (when he died), he is credited with 77 albums under his own name!

Still, so much music to choose from so I’ve picked out 5 of my favourite Cal tracks for now from his early days to his final recordings. No doubt I’ll be spinning some of these at MANTECA….

1). “Bamboleate” – Eddie Palmieri & Cal Tjader (Tico Records 1967)
The title track from the 1967 collaboration between two of the biggest Latin music artists of the time – pianist Eddie Palmieri and vibes player Cal Tjader. An explosive mozambique descarga jazz jam that had Eddie’s rock solid piano montuno anchoring his firing band La Perfecta as Cal went off into the stratosphere with his vibes solo followed by La Perfecta timbalero Manny Oquendo, whose solo took it even higher! I never played this out for salsa dancers…they couldn’t handle it’s tempo and rhythm. Purely for 1980s UK jazz dancers….

2). “Guachi Guaro” – Cal Tjader (Fantasy Records 1954)
From the “Tjader Plays Mambo” LP on Fantasy Records from 1954, this was Cal’s first recording of what would become his anthem over his 40 year career. A rework of Dizzy Gillespie and Chano Pozo’s groundbreaking Afro-Cuban jazz composition from the mid-1940s, also know as “Wachi Wara”, Cal gives it a lively cha cha cha flavour. I love the double bass breakdown and the heavy conga tumbao on this version which has much more bite than the 1964 version he cut for Verve Records that would become a minor pop hit for him.

3). “Shoshana” – Cal Tjader (Concord Jazz Picante 1980)
Another Tjader Latin jazz anthem but from his later period for Concord Jazz Picante Records, a label he switched to in 1979 after decades with Fantasy Records. This is the original studio version which I came to after I first heard the track on his live “Good Vibes” LP of 1984. Live or studio, it’s a beautifully simple melody written around Mark Levine’s piano montunos, Rob  Fischer’s heavy bass pedals and Poncho Sanchez’s solid conga tumbao. In the 1980s, this was hammered around jazzdance sessions all over the UK. Nuyorican Soul would cover the track on their 1997 self titled album. Not a bad version actually but you can’t beat the original.

4). “Mueve La Cintura” – Cal Tjader Modern Mambo Quntet (Fantasy Records 1957)
This was Cal’s 15th LP since he began recording as a solo artist in 1951 and it came out at the height of the “mambo craze”, hence the band’s name Cal Tjader’s Modern Mambo Quintet. I love the simplicity of this tune – 2 chords, simple percussion rhythms. nice unison vibes and flute theme. Cal doesn’t even solo on vibes here but let’s Jerome Richardson cut loose on flute. That rock solid conga playing is Armando Peraza, ex-pat Cuban conga king. The only downside of this number is the length…just 2.30! It would have been nice to come back in with some vibes soloing after the conga solo but what can you do! Live recordings, 1 or 2 takes, very little editing and over dubbing, time was money. Keep it short to avoid mistakes and retakes to save money and then onto the next tune. Still a great track.

5). “Amazonas” – Cal Tajder (Fantasy Records 1976)
Great title track from the 1976 LP produced by Brazilian drum/percussion maestro Airto Moreira and featuring some Brazilian music giants such as Hermeto Pascal (flute), Egberto Gismonti (keys)  and Raul De Souza (trombone), plus arrangements by US jazz fusion king George Duke. Cal plays beautful marimba solos here (the marimba is the wooden vibes-like  instrument). One of his heavier excursions into Brazilian music, it had the contemporary sound of jazz-rock/jazz-fusion and comes across as a much more serious and deep album than some of his previous recordings of the 1960s and early 1970s.

I will definitely be playing some Cal Tjader tracks at Manteca and I might come back with another future blog and cover another 5 songs from his huge back catalogue.  I haven’t even started digging into his recordings as a sideman with George Shearing, Dave Brubeck and others!