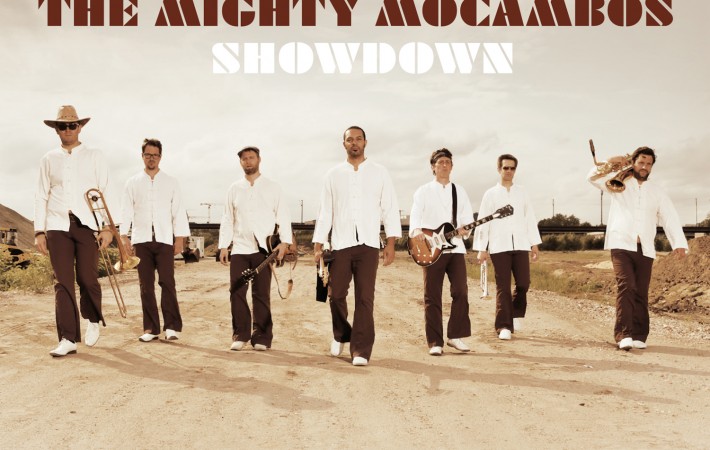 Filed Under: News, Reviews, Talkin' All That Jazz, Vinyl Junkie

German soul brothers The Mighty Mocambos have been putting out good funk/soul music and knocking audiences out live for a decade and a half now. A host of releases on quality labels such as Truth & Soul, Légère Recordings, Kay Dee, Tramp, Favorite and their own Mocambo Records have lifted them into the premier league of contemporary European funk and soul artists.

The new album “Showdown” drops on 27th March 2015 and is more of the same high quality music we’ve grown accustomed to. No re-inventing the genre here, just a refinement of what’s already working well. Like the old saying goes, “if it ain’t broke, don’t fix it”.

There a nice mix of styles which work for the car, crib or club. Instrumental and vocal funk/soul bombs which will keep everyone hot and sweaty on the dancefloor….bboys, soul sisters, funk brothers, jazz hipsters. Opening track “Road To Earth” is a tasty cinematic soundtrack joint that wouldn’t go amis on a classic 70s US blaxsploitation movie. Makes sense once you find out it’s a collaboration with German film score composer Peter Thomas. Very nice film funk groover with spacey piano lines over the top. One for the headnodders!

There are two great vocal funk/soul bombs that will make the DJs and dancers happy. “In The Dark” featuring vocalist Nichola Richards, and “Not Get Caught” with singer DeRobert. The latter struts along like some classic ghetto soap opera tale that singers such as Bobby Womack or Joe Simon would belt out back in the 1970s. A time when you had to hustle with every muscle just to stay alive 🙂

Final batch of tracks are funk/soul/hiphop link ups, taking it back to the original block party jams vibe of the mid-late 1970s, when hiphop was still developing in the boroughs of NYC.  Beats, breaks, raps, life. No wonder they’ve collaborated with the original hiphop pioneer once again, main man and Zulu Nation founder Afrika Bambaata. “It’s The Music” recalls those early hiphop classic where rappers rhymed over live band tracks. Notch the pitch up on this a bit and it’s going off at my “Soul Rebels” jams in Leeds (UK)…that bboys cypher will be on fire!