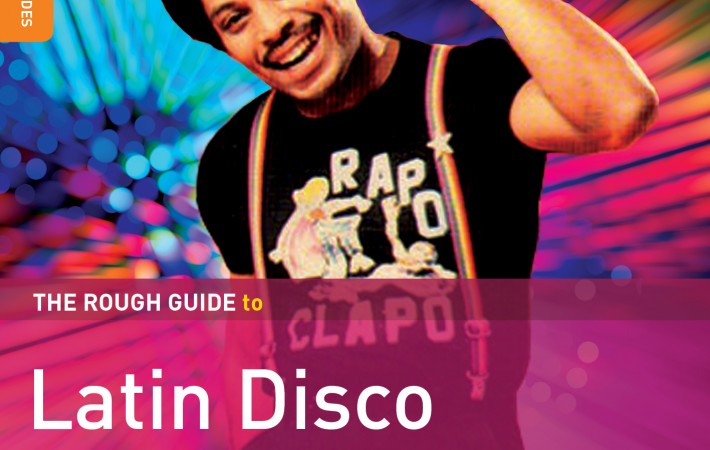 Filed Under: News, Talkin' All That Jazz, The Latin Lowdown

“Rough Guide To Latin Disco” on World Music Network, available in both digital and CD formats.

To be honest, I thought my music compiler days were over. I haven’t had one released since “Beginners Guide To Salsa 4” back in spring 2012 on Nascente Records and I’d given up on them for a variety of reasons. Main thing was time. I was so busy with live concert and clubnight promotions post 2012 that I didn’t have the energy needed to put a compilation together. Takes a lot of time and effort plus mental energy to do them. Back at my compiling peak in the 2000s, I wasn’t working as much as a promoter, mainly as a DJ, so I had much more time to concentrate on compiling work.

However, in January 2015 when World Music Network contacted me about this title, I’d had a break so I thought I’d give it a go. Six months later, here it is. A 12 track introduction to Latin Disco both past and present. Some huge disco hits from the 1970s (the Salsoul ones), a few lesser know songs from the same era plus a bunch of tracks from bands still loving Latin disco today. A starting point for those not familiar with the genre rather than a connosieur’s delight.

I have to admit, it was a tough album to put together. When you compile CDs for the budget labels, there’s so many restrictions from the beginning due to cost and availability. I couldn’t get any Fania Records tracks (or tracks on labels they own like Tico, Alegre, International, Vaya, Speed, WS Latino). Also no major label tracks and nothing from Cuba’s EGREM Records. Tough call! I managed to get anything I wanted from Salsoul Records plus a few smaller Latin labels of the 1970s and then added the contemporary artists. It was tricky but I think it came out okay.

From the original 1970s Latin disco pioneers, I have music by New Yorkers Joe Bataan, the Salsoul Orchestra and Yambu, from US based Cubans Fajardo and Candido and from Colombia, Wganda Kenya. Added to this are contemporary Latin disco tracks from UK based artists Los Charly’s Orchestra, Malena and Grupo X, and one from Californian Afro-Latin funksters Jungle Fire.

For more information on the full release, go to the World Music Network website at www.worldmusic.net and check the Rough Guides section. For now, here’s a few of my favourites.

“C’mon On Baby Do The Latin Hustle” – Jose Fajardo (Coco Records 1976) – obviously cashing-in on violinist Eddie Drennon’s huge disco hit from the previous year,  veteran Cuban flautist Fajardo does a great job on this Tom Moulton/Harvey Averne production.  I also own the 7″ version of this.

“Sunny” – Yambu (Montuno Records 1975) – New York salsa/Latin jazz band Yambu and their musical director and pianist Milton Hamilton came up with this great Latin disco-jazz update of the Bobby Hebb classic. When aired on the legendary US TV music show “Soul Train”, it had the dancers busting some serious moves.

“La Botella (The Bottle) – Bataan (Epic Records 1974) – Afro-Philipino Latin soul singer/musician Joe Bataan was so important in the formation of disco, I had to feature two tracks from him (he is also on the compilation’s artwork). After this stomping instrumental cover of Gil Scott Heron’s ghetto life classic was a hit, owners of Joe’s label Mericana Records, the Cayre brothers, started a whole new record label for him to sell his Latin funk/soul music to a wider audience outside his Latino fan base. They called the label Salsoul Records, an amalgamation of the words “salsa” and “soul”, and within a couple of years, it had become the biggest disco label in New York. And the rest is history….

That’s it for now. I hope you like the music here. Go check the compilation. Also check out some of my other titles since 2003 under the “Compilations” section on this website.