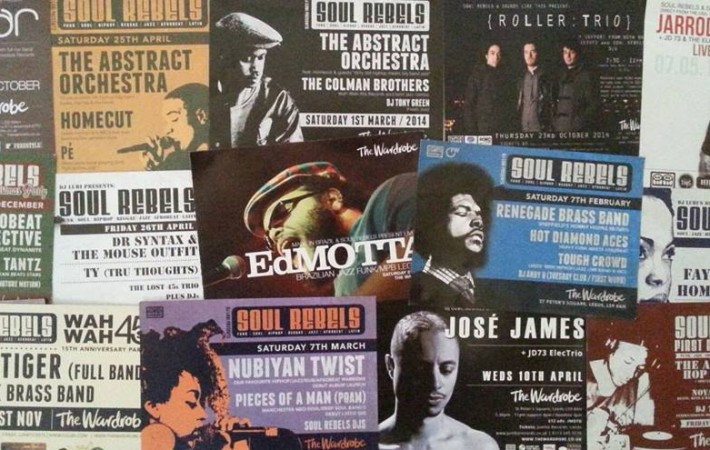 2015 was an important year for my Soul Rebels brand in Leeds. This is where I promote all my non-Latin stuff including jazz, funk, soul, hip-hop, afrobeat, Brazilian beats, reggae, global sounds and electronica. It started as a regular live music and DJ-based clubnight but has now expanded to include stand-alone live gigs and a radio show.

I had originally launched the clubnight in 2012 for a variety of reasons. I was bored with of a lot of places in Leeds. I wanted to go somewhere to hear original live music not just endless covers of wedding funk/soul hits. So much good music from so many great bands and artists based in our city, especially the new generation of players coming through from Leeds College Of Music, and much of it wasn’t even being heard live.

I couldn’t find such a place so I just started a night myself. Exactly what I’ve been doing since I launched my first ever clubnight over 3 decades ago. The first Soul Rebels night in 2012 we sold out The Wardrobe with 450 people and since then, I’ve never looked back.

In October, we celebrated our 3rd birthday party for the Soul Rebels clubnight with another great packed out gig at The Wardrobe. It’s not always easy promoting non-mainstream and leftfield music but I usually get it right 2 out of 3 times. There’s always that one show where you just call it completely wrong but that’s life. You make the wrong decision, you get knocked down, you get back up and you carry on. The fact we are now into our 4th year makes me quite proud and a happy man 🙂

Last year we had some great sold out clubnight sessions at The Wardrobe with Nubiyan Twist, Renegade Brass Band and The Abstract Orchestra. We also showcased a lot of new young bands/artists, tomorrow’s generation, which I believe is important to do. I was helped out when I first started and I try and help those coming after me as much as I can. We have some amazing new young talent coming out of Leeds and the north of England and Soul Rebels featured some of them live in 2015 – Malaika Shaw, Paris & The Samurai, Tough Crowd, RE:SOUL, Pe,  Pieces Of A Man. Watch out for more new bands/artists for 2016 including Kalyan, Michael Bird, Dulahli, Gracie Convert and Portmanteau.

The Soul Rebels brand went beyond just the clubnight in 2015. I decided to start doing more stand-alone gigs and not just at The Wardrobe but also at Belgrave Music Hall and the Hifi Club. We saw some great shows from the likes of The Haggis Horns (3rd album launch), Tantz (debut album launch), Nearly Dan, Brian Auger’s Oblivion Express and the return of USA rising soul star Jarrod Lawson to the city. Watch out for more of those in 2016 including the return to Leeds of Jurassic 5 rapper Chali 2na plus the debut gig in the city by Brazilian rap/samba superstar Criolo. Check my calendar regularly for the latest info on all my gigs and clubnights or follow me on Facebook (Lubi Jovanovic) and Twitter – @djlubi – to stay in the loop.

Finally, 2015 saw the launch of my “DJ Lubi Presents Soul Rebels” monthly radio show on the super cool KMAH Radio of Leeds. I love the station as they have an actual broadcast studio so I can do all my shows live on air and not have to pre-record them and upload them to a website. It’s a chance for me to play all the music from the clubnight and live gigs but also so much music I can’t play out as a DJ in those environments. Music purely for listening to. The radio show gives me the chance to mix up all my favourite music genres so you get Kendrick Lamar’s leftfield and angry hip-hop followed by Sharon Jones’s uplifting soul music. Then Cuban salsa from Havana D’Primera moving into straight-up firing acoustic jazz from Kamasi Washington. Sometimes I do a contemporary artists show, all new stuff, and another time it’s a 100% vinyl classic and old school music where I really dig deep into my collection. Check my previous shows on this website. I post them up with the podcast download link/listen again link a few days after a live broadcast and always featuring the full playlist. I have to say, I am loving the radio show a lot.  Here are the next 4 radio show dates : Monday 1st Feb – Monday 29th Feb – Monday 28th March – Monday 25th April

With all this happening – clubnight, live gigs, radio show – I think 2016 looks like it should be another great year for my Soul Rebels brand. You never can tell though with this topsy turvy world we live in so let’s see how it goes. Whatever happens, I’m just thankful I can still do this job which encompasses something I love and have loved since I was in primary school…..MUSIC!