The first record I ever bought…. 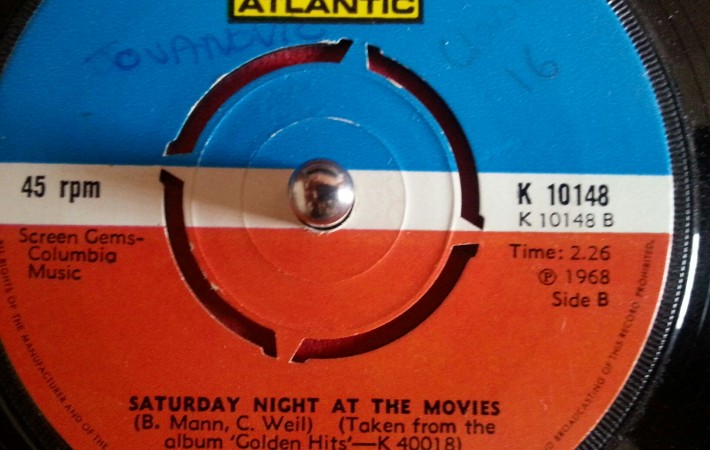 The first record I ever bought….

I just found the first record I ever bought a few weeks ago in amongst a pile of old 45s. Saturday Night At The Movies by The Drifters on Atlantic Records. I bought it in 1972 as a re-issue of a previous hit in 1964. For some reason, it was in the top 5 singles in the UK again when I went with my sister to a local record shop that year (Pearson’s Records in Shipley, Yorkshire, UK). She was three years older than me and already buying records regularly. I’d tagged along with her and two girlfriends as I wanted to buy a record too. Any record, I wasn’t bothered. I just wanted to copy her.

They knew exactly what they wanted but I was totally lost amongst the dozens of LPs and singles in the shop so in a panic, I saw the Top 20 chart and recognised this Drifters single as it had been on Top Of The Pops on BBC1 that week and I bought it!

It was quite an odd choice in hindsight as me and my mates were into our loud and brash glam rock bands (Slade, Sweet, Wizard, Mud, Suzi Quatro etc), but it started the habit of a lifetime so I don’t complain. After this first vinyl encounter, I began visiting this record shop and the local Woolworths record department every few weeks to spend my hard earned paper round wages on the top 5 singles in the UK charts.

By the way, the picture with this post is the actual single I’m writing about. Notice Jovanovic and Class 16 scrawled across the label. That’s because I started taking my growing singles collection to school to play the music at the end of school dances for my year and NOBODY was stealing my vinyls, even age 10 years old 🙂