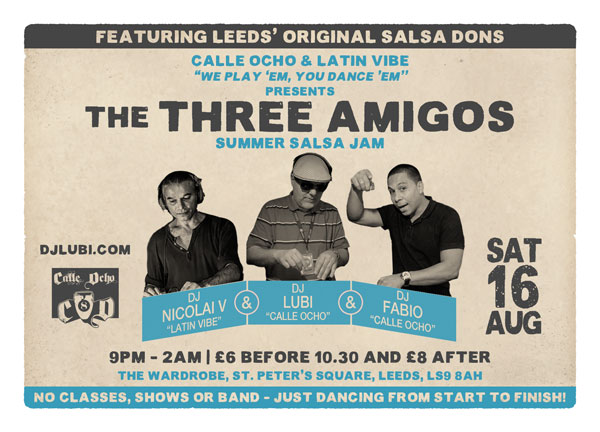 Filed Under: News, The Latin Lowdown

I’m really happy to be back on the decks with my oldest salsa mates once again for our Three Amigos party at The Wardrobe in Leeds (UK) Saturday 16th August.

Myself, Fabio Bahia and Nicolai V, three DJs with 60 years experience between us playing good salsa, Cuban and Latin music for dancing. No distractions from salsa dance classes, salsa dance shows or a live band, just music and dancing (plus rum) from start to finish.

We did the first Three Amigos DJ jam last May at the same venue and enjoyed it so much we had to do it again. We’ve been mates for around 20 years and it’s always fun to throw a party with good friends. Interesting how the three of us first met.

I started DJing Latin music in 1982 and specialising in salsa in 1986 starting my first clubnight Club Afro Latina that year in Leeds. End of the 80s/early 90s, I was playing bass in my latin jazz group Conjunto Fuego and at each concert, I always took my Latin vinyls and spun for the after-party. Around 1991, I met Nicolai V at one of these gigs. He was a student of the first salsa teacher up north, Colombiana Tanya Cusan, based in Leeds, and she and her students started coming to our band’s gigs and then later, to my clubnights. They were the vanguard of the salsa dance movement in the north.

Nic began assisting Tanya at classes and became a salsa teacher himself around 1996 at my Casa Latina clubnight (The Underground, Leeds) and other venues. By the end of the 90s, he was running his own parties, teaching salsa dance around the UK and also DJing.

I met Fabio at Casa Latina at The Underground in February 1995. He was actually working there as a glass collector and because we used to play Brazilian music at the night, we got chatting and that was the first contact. He used to collect glasses and dance too much with the ladies whilst doing it so the venue said either collect glasses or drop the job and dance at the clubnight. Thankfully, he did the latter and by 1996 he was DJing both at La Tasca Manchester (with Fernando Brasil) and for me at Casa Latina in Leeds. In 1999 he became an official Casa Latina resident DJ and the rest is history.

It’s nice that we’re all DJing together again at this party at The Wardrobe. Kind of completes the circle as The Underground, where we all first hung out at Casa Latina, opened 20 years this August. Also The Wardrobe, the second home of Casa Latina from 1999, opened it’s doors 15 years ago.

So on Saturday 16th August, we celebrate a little bit of our own Leeds salsa history plus the fact that The Three Amigos from those early days are still here and doing what we do succesfully so we must be doing something right!